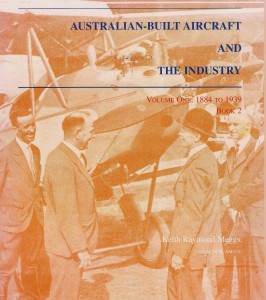 “If we had a “Book of the Year”, this would probably qualify. Here we have a truly monumental work; …. The author has undertaken the enormous task of recording the complete histories of every aeroplane designed and built in Australia from the earliest times to the 1980’s, and this massive two-book volume in its smart blue slip case, taking the subject up to 1939, is just the first of four planned volumes. ….

All aeroplanes are included, those designed and produced in Australian companies, those built under licence, foreign machines in Australian ownership, successful and unsuccessful  one-offs created by private individuals and homebuilts of foreign design. It is almost guaranteed that everyone will find some aircraft of which they had no previous knowledge, and that they will also learn a great deal  more about  a great many aeroplanes. Book 1 opens with the designs of Lawrence Hargrave and goes on to cover early experimenters, First World War activity and then begins to embrace the inter-war products. Book 2 continues this theme, taking the subject up to 1939. The text is complemented by more than 1,900 photographs and drawings, and a comprehensive index. Each chapter has pages of endnotes …..

In general the history appears to be meticulously researched. I was overwhelmed by picture and histories of types that were only vaguely familiar or completely new to me, and the work is a veritable mine of information……….

This might seem extravagantly priced but it is a truly exceptional magnum opus, and we shall not see its like again. Buy now or be sorry!

Overview
The four volumes in the series cover every known powered aircraft designed or built, from Lawrence Hargrave’s experiments in the 1880s through to Keith’s self imposed cutoff point in the mid-1980s. (see later)
The books lists over 540 aircraft types as well as detailed histories of the companies involved in their construction. Coverage is multi-faceted being technical, operational, historical, industrial, sociological, biographical, and political. Each volume contains numerous photographs and technical drawings, many of which have never before been seen outside the original source. The drawings include many originals from the early Australian aircraft projects.
Exhaustive research was undertaken to unearth the details of negotiations between Australian companies and those in Britain and the USA, most of which are assumed to have been irretrievably lost in the countries of origin, with no mention of them elsewhere. These include production proposals for the Vultee Vengeance, Grumman Panther, Bristol Buckingham, North American F-100, Avro 10, Concordia and the Republic F-105.
All volumes are superbly indexed and cross-referenced with the main text reinforced by extensive and detailed endnotes.
Why the self imposed cutoff point in the mid-1980s?
The mammoth research task was unprecedented in magnitude. Traveling the length and breadth of Australia for some 40+ years had turned up a staggering amount of unique material but inevitably, as with all research, a cut-off point had to be decided upon.
Peripheral material still had to be collected such as illustrative drawings, blue prints and dyeline prints. Old drawings needed rejuvenation, plans had to be rescaled; as well, fresh illustrative drawings needed to be created, and finally the wealth of photographs had be scanned and captioned.
It was finally decided that it was better to develop the immense amount of material already gathered up to the mid-1980’s rather than spend more years on research, and to run the risk of running out of time. The author was not getting any younger.
Again it must be emphasised that, in scale and detail, there is nothing in Australia, or for that matter the world, like this work.